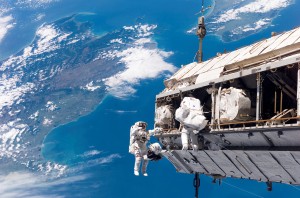 Imagine being the landlord of this multinational facility – and while its only some 286 miles away, the average round trip cost to service it is $750,000,000.

To date, ISS has been visited by 200 visitors on some 36 space shuttle launches and/or 9 Russian Launches. The ISS represents the largest manmade structure outside of Earth, contains 29,561 cubic feet and is estimated to have cost $150,000,000,000 to design, launch, assemble, maintain and service. That works out to be about $5,074,253 per cubic foot.

Regardless of how you feel about the space station, it is amazing to think that over 100,000 people from 15 different nations have been able to work well enough together to allow this project to continue.

Other interesting facts: as of today, the International Space Station has made over 46,000 orbits around the earth – along a path that is visible to over 90% of the world’s population.

Thanks to Gizmodo for the 10th anniversary alert!