Wired Magazine has an article on the upcoming Terminator moved which has been filming in Albuquerque during the last year.

As New Mexico continues to beef up its filming resume, I remain amazed at how many buildings I recognize in various movies. Take this photo for example: 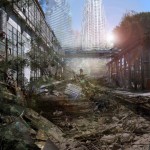 Although the photo shows a post apocalyptic scene of destruction (remember Terminator is the movie where the robots take over the earth and hunt down the humans), most Albuquerqean’s would know this building as the old rail yard (also featured in the Transformers movie).