Cantera Consulants & Advisors has just updated its notice of value dates from each of the county assessors.

Please remember that you only have 30 days from the date of the notice of value to protest your property taxes. 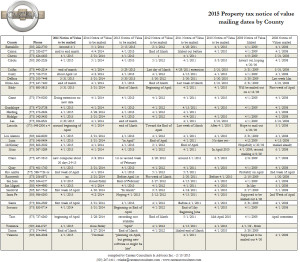 A PDF version of this table can be found here. 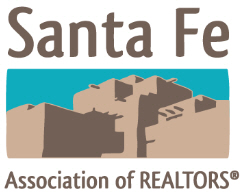 The following is a quick update on property tax issues from 2013 and a preview of what we can expect in 2014 and 2015.
2013 protests
As you may recall, I did not expect 2013 to be a year that we would see much in the way of reductions. I did encourage some of my clients to file protests, because we had a new assessor and the top commercial appraiser had moved from Sandoval to Bernalillo. Unfortunately for us, that top commercial appraiser moved back to Bernalillo county mid 2013.

The reductions we were able to get in 2013 were a result of squeezing a bit more from the stone, rather than a new approach or philosophy.

Bernalillo and Sandoval county are aggressively reappraising right now – in fact, you can monitor Bernalillo countys progress here -http://www.bernco.gov/Assessor_Canvass . Remember, they are required to obtain the most accurate and correct information, and its been my experience if you are helpful on the front end (i.e. let them into your building, hold the other end of the measuring tape), they are more inclined to help you when it comes to the revaluation. Residential reappraisals are occurring on a map basis (i.e zone atlas page by zone atlas page)

As it relates to commercial properties, the only major increase I expect for 2014 will be for mini storage, assisted living and banks as they have completed their new valuations for these properties types. I’ve been told that the balance of commercial will show up in the 2015 notices of value.

Legislative update:
Our various trade associations like AANM and RANM were very busy this year tracking bills, responding to our legislators, and pushing back on bills that would have a drastic impact.

House Bill 178 (attached) was probably the most problematic of the bunch as it restored the increase of property taxes at time of sale starting in 2015. (a fuller update on this and other bills can be found below my signature line. Thanks to RANM for the update).

The Apartment Association of NM is working on raising funds and partnering with other associations to have a white paper completed this year that can be used to create new legislation to address the property tax lightning mess in the long 2015 session. Email me if you want more info on this process.

Notices of value for 2014
I will be updating our notices of value spreadsheet (2013 notice of value dates can be found here – http://www.toddclarke.net/?p=1656)

NOTE: The Bernalillo County assessor has sent out a notice to all property tax consultants that they need to update their client authorization signature pages. They have had issues in previous years with consultants “slamming” clients and filing without their approval. What does this mean for you? Just send me your notices of value (as they arrive) and I will send you a new contract for 2014.

While I am not expecting increases this year, I do expect previous properties that we have protested may have corrections in info that may lead to increases.
Thanks,
Todd

The thirty day New Mexico legislative session is over and RANM was successful in getting three bills passed, two of them sponsored by RANM. House Bill 185 (HB185), the Commercial Real Estate Broker Lien Act and Senate Bill 124 (SB124), the Real Estate Foreign Broker Bill, passed in both the Senate and the House. SB110, the Real Estate Appraisers Act, was another high priority bill supported by RANM, also passed.

The bills will be sent to Governor Susanna Martinez for action.

THE 2014 SESSION
The whirlwind thirty day session had a less contentious feel due in part to a much narrower Democrat majority in the House of Representatives and with upcoming elections, neither side appeared anxious to engage in hostile partisan politics.

Some of the bigger issues were the budget, minimum wage, capital outlay and the Navajo Nation gaming compact. The $6.2 billion budget—dubbed a compromise—passed both Houses with apparent input from the Governor’s office. It includes a minimum 3 percent raise for State employees and teachers. The fear was that the budget battle would derail the session and result in the need for a Special Session.

HB55, the $232.6 million capital outlay bill, which funds projects throughout the state, also passed. $184.8 million of the projects will be funded with severance tax bonds, the remainder from other state funds.

THE RANM BILLS
One of the RANM-introduced bills that awaits the Governor’s signature—HB185—passed the House and was on the Senate calendar when time ran out. The Real Estate Appraiser Act was signed into law last year but amendments were introduced and passed this year to clear up some of the language.

HB 185, the Commercial Real Estate Broker Lien Act sponsored by Representative Antonio “Moe” Maestas, allows Real Estate Brokers to file a lien against commercial (not residential) property for leasing commissions owed by the owner of property if the property owner had a written agreement with the real estate broker to pay leasing commissions. You can download a copy of the bill by going to this link: http://www.nmlegis.gov/Sessions/14%20Regular/bills/house/HB0185.pdf

The other bill on the Governor’s desk is SB124,which amends the Real Estate Foreign Broker Bill, was introduced by Senator Phil Griego. The act was amended to add a definition of Commercial Real Estate and to allow out-of-state brokers to practice real estate in New Mexico with respect to commercial real estate only, provided they enter into a transaction-specific written agreement with a New Mexico real estate broker. For a full copy of this bill go to:
http://www.nmlegis.gov/Sessions/14%20Regular/bills/senate/SB0124.pdf

OTHER HIGH PRIORITY RANM BILLS OF INTEREST
A “tax lightning bill” opposed by RANM, HB178 introduced by Representative Brian Egolf, never made it out of committee and died. RANM sent out a “Call to Action” on this piece of legislation. RANM members responded, many contacted their representatives, and it helped narrow the vote. It did narrowly pass in the House, 32-30. RANM considered this bill unconstitutional and deemed the caps on property evaluation would have the opposite effect and negatively impact real estate sales.

Another bill that addressed tax lightning, SB260 introduced by Senator Steven Neville, died in committee. This bill attempted to fix the tax lightning problem with the valuation and taxation of residential property. This bill transitions valuation to a percentage of the “current and correct” standard set in the Property Tax Code.

THE RANM LEGISLATIVE PROCESS
A total of 1,082 bills were introduced this thirty day session—549 in the House of Representatives and 533 in the Senate. Of all these bills only 126 of them survived; a success rate of a little over 11.6 percent.

Each bill usually gets one or more committee referrals, and if the bill survives all committee votes (some never even get a committee vote and thus fail to advance), they then face debate on the floor of the chamber in which they were introduced. If it passes it then goes to the other chamber where the process starts again. If the bill survives the second floor vote without amendment, then and only then, will it get consideration by the Governor who has 20 days after the session adjourns to take action which would be either to sign the bill, veto the bill, or not sign it (called a pocket veto).

RANM’s staff reviewed every bill and made recommendations to RANM’s Legislative Committee as to which pieces of legislation had a direct or indirect impact on the membership. A total of 104 bills—about 10% of those introduced—were so identified. They were categorized (taxes, water, regulatory, economic development, commercial, mortgage/lending, etc.), assigned the level of interest (high, medium, low), and whether they should be supported, opposed or simply monitored.

OTHER BILLS OF INTEREST TO RANM
The bills previously mentioned were high priority bills. Some other bills of interest included:

SB89, introduced by Sen. Peter Wirth, this bill would have affected the Gila River basin in southwest New Mexico, but never made it out of the Senate Conservation Committee. It would have required the Interstate Stream Commission to divert flood waters.

HB51, introduced by Representative Yvette Herrell and passed in both chambers, amends the Right to Farm Act, a pro-agriculture bill, passed both houses. It amends the Right to Farm Act to provide that no agricultural operation may be deemed a nuisance unless it is operated negligently. The New Mexico Department of Agriculture said about this bill, “Across the United States, nuisance law suits are being filed based on the encroachment of urban presence adjacent to agriculture activities. The consequence of nuisance or negligent lawsuits provides the potential to impair the state’s industry and the state’s economy and provides a negative impact on the ability for the industry to operate.”

Known as the “pottery house” and located in Santa Fe – this Frank Lloyd Wright designed house has recently come up for sale and is being offered by the original owner for $6,000,000.